Back in the (Medication) Saddle Again.

So I'm back on my meds and have been for about three weeks. I went through my family doc instead my psychiatrist since the psych isn't covered by our insurance and I don't feel like shelling out $100 every couple months. And because the psych's office was hard to work with when it comes to refills. The family doc and I have a good relationship and she trusts me enough to give me a year's worth of refills and check in occasionally.

When I got the refill I felt relieved--there would be a buffer between me and my feelings and the world again--but I also felt a little sigh of disappointment. I guess I'm disappointed because this means I'm still depressed which sometimes just seems like a euphemism for broken and/or abnormal. But I keep reminding myself that it isn't. It's a medical condition and lots of people have those.

The emotional straw the broke the sanity camel's back was a blow up at the Little Cannoli. She's almost two and has been going through some of the ups and downs of toddlerhood. I mean, she's still a great kid and usually even-keeled but she still has tantrums and screams and cries. Princess N was having a resurgence of her anxiety and her phobias are ratcheting back up again (although, praise Heaven, things have been calming down over the last few days; I hope it lasts!) and I was expending a lot of energy helping her through it. Supergirl E was going through a growth spurt so she was starving, tired, and full of sore muscles. Mr. J was just getting back on his medication for his atopy (I keep meaning to blog more details about his condition and what we've learned but I haven't gotten to it yet!) and the side effects of that are hyper-emotionality, increased impulsivity, and aggressiveness (think ADD). Since he's already a pretty high energy kid it is pretty taxing.

Anyway, like I said, what convinced to go back on the meds was when I lost it at the Little Cannoli. I yelled at her. Well, screamed at her. I realized I was losing control and handed her off the my husband and he worked from home that day while I took Princess N to the doctor (asthma and allergy testing, just in case there were underlying physical contributors to her anxiety) and then cooled down for awhile.

You know that moment in Monsters Inc. when Sully yells at Boo and sees himself yelling at Boo and realizes that he's a complete scumbag for scaring kids? It was like that. Nothing makes you feel worse than doing wrong by your kids. 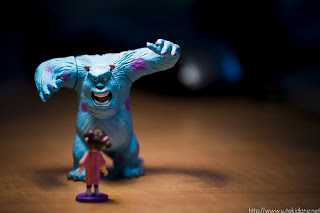 So I'm back on the Paxil in hopes that it will improve my sleep (it's very hard to get to sleep and when I do I don't sleep very deeply), dull my sensitivity to noise and clutter, and just help me relax. Since going back on the meds I actually feel more tired (which is odd since I think they contain a stimulant) but it might just be because my body was running at anxiety-fueled hyper-speed for the last few months. . . I don't know. I gotta get more sleep; make up for the poor quality sleep I was getting for the last couple months.

I feel less these days--but mostly in a good way.  Medication does not equal failure. Medication equals medical condition. I just have to remind myself :)
Posted by Laura at 2:30 AM 4 comments: