Living with Atopy: My Preschooler's Journey to Diagnosis

This is the first in a series of posts about my son's life with Atopy or Atopic Syndrome and what solutions have worked for us. 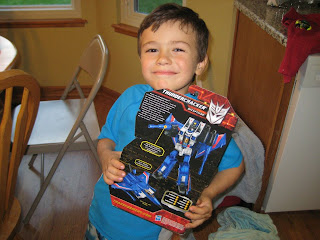 He is now five years old and pretty happy and healthy. But not always. From the time he was born he just seemed to struggle. He had a ton of cradle cap. Cried all the time. Didn't nurse well. Struggled with rashes and eczema. Couldn't gain weight. Excessive amounts of drool. Chronic ear infections. Never slept for more than 45 minutes. Sometimes as little as 20 minutes. Would scream like he was in pain for no apparent reason.  At nine months he weaned himself and stopped growing almost entirely. He was declared borderline "failure to thrive" (which has been linked to caregiver depression *cue massive load of mother guilt*) and our doctor got serious with us.

She put him on a high fat diet and an antacid. He started to gain a little bit and we breathed a sigh of relief. We hoped Gastroesaphogeal Reflux Disease was our silver bullet.

His eczema only got worse. His fussiness didn't stop. He still didn't eat well and he drooled everywhere. His sleep got worse and he started having multiple night terrors a night. One particularly frightening one was when he was about two and we found him in his room with his toddler bed lifted half off the ground and getting ready to drop it on himself. There was also the time he bolted from his bedroom and almost fell headlong down the stairs. He would scratch like a wild animal. We would put mittens and sock on his hands, but he always managed to pull them off. His sheet were covered in blood most morning. He was still a wreck.

I came across some information on Obstructive Sleep Apnea and he fit the profile. A couple months shy of his two-year-old birthday we got his adenoids out and the drooling stopped. But everything else was still awful.

It's hard to express the toll this took on the family. We were all exhausted because whenever he woke up his screams filled the whole house. He would cry so hard the other kids would end up crying too. My oldest, Princess N, had anxiety attacks because of his crying. We were all on the edge because Mr. J was always on the edge. Seriously. Three years (that 36 months or 1056 days) of constant stress and lack of sleep.

We tried everything for his eczema but he didn't tolerate most creams. They usually made the rash worse and stung a heckuva lot. He would cry and scream and hide and hit and pinch and kick--anything to avoid them. So we tried all the natural alternatives. Oatmeal did nothing. Baking soda was not helpful. Petroleum did nothing. We had a little luck with coconut oil--the real cold-pressed,virgin stuff. But nothing was consistent.

We tried elimination diets (dairy, soy, and gluten), none of which did a thing for him.  When he was almost three we did a scratch test and he came out allergic to cat pelts (but not the fur. How is that possible??) and pretty much EVERY tree, grass, and weed. But no foods and no silver bullet. We started him on Claritin.

His sleep issues were what was making us the craziest so I eventually decided to try and get him in to the Pediatric Sleep Clinic at National Jewish Health and since the wait was shorter for a pediatric eczema consultation we went that route. It was four months before his four year old birthday.

Wow. What a difference a specialist can make. It took a few months of regular visits and observations but, seriously, in a couple months Mr. J was diagnosed with Atopy (an autoimmune disorder that is probably genetically driven and centers around the interactions of eczema, asthma, and allergies). We found a series of medications (4 daily and three for emergencies) that works for him and, most of the time, he is healthy. He sleeps all night now (turns out treating the asthma--although he had to contract a severe, RSV-type infection for us to diagnosis it-- was the silver bullet for that one). His rashes are still a regular thing but we know what to do with them. The allergies are handled. He has caught up on all the charts.

I am still amazed.

Things aren't perfect now. We have to be absolutely vigilant with his eczema care regimen and the more sports stuff he does the more we have to deal with his asthma. The side effects from some of his medicines are tricky--especially the ADD type behaviors. But, things are so much better now. We can handle it. We have resources and answers. That's good.

Anyway, that's his journey to diagnosis. Other posts in this series will include information on each aspect of his disorder and what we do to treat it--especially his eczema. I'll include tips and tricks for medication and explanations of differing theories about atopy.  Lots of info coming you way!

If anyone who has a child with atopy comes across this post, please leave me a comment and tell me your child's story! I want to know how it's gone for you.

Where Do We Go From Here?

It's been a while since I wrote. Don't worry; I'm not doing any sort of catch-up post. I'll just say this:

Depression is holding steady. Still rears it's ugly head from time to time, but for the most part I am stable and functional and, dare I say it?, happy.

Thanks for sticking with me, you few loyal readers out there.

And thanks for stopping by, all you folks who stumble on this little blog by way of the Great Google.

And, hey, since it's technically still a Monday I'll end with a something to make you smile: The Piano Guys! Can't get enough of them :)