Psychological Tweezing (and other thoughts on emotional honesty) 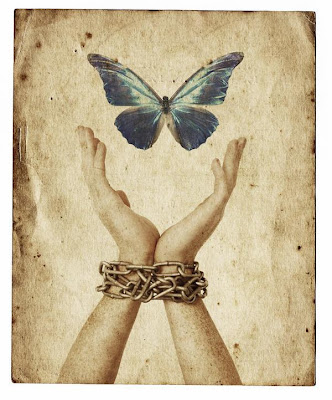 I've meaning to blog lately. Catch up on life and explain a little. Because I'm trying something new and it feels significant. But it also feels painful. Very painful. And personal. So it's hard to put it down here.

How's this for a really vague start? Some stuff happened a while ago that shouldn't have and the consequences just keep raining down.

An odd thing: every time I go off my antidepressants I have these same impressions about the "stuff that happened a while ago"--not like testimony meeting impressions--but like strong, emotional messages that require some sort of action. In the past the only action that has made sense is self-harming options. Like I used to get frenetically and abstractly suicidal. Or I would have visions of carving my arms and stomach up, like I was a surgeon cutting out some sort of contagion. Or like I was too full inside and if I could just bleed a little there would be some relief to the emotional congestion. At the other end of the violence was always the possibility for someone else to take over, for escape, for rest.

I never acted on that stuff, it was just always presenting itself as the answer. But, probably thanks to all my friends who tried to kill themselves in high school and my sister who got her undergraduate work in psychology and because my grandma tried to kill herself but went to a sanitarium instead and was open about it, I knew there was another option--a good option: medication and therapy.

And it was good. It was helpful. But it didn't make the impressions go away (which always disturbed me a little). The medication made the impressions quieter so that I could start to examine the pieces that didn't overwhelm me. Therapy gave me the tools I needed to figure out how to examine them. (The tools I use most often are self-observation techniques and self-questioning processes, in case you were wondering.)

So now I'm here and something clicked and I'm taking on those impressions. I'm looking those emotional messages square in the face and unraveling the facts from the fiction. Well, that's the ultimate goal. Right now I would say I'm just allowing the impressions their space. I'm hearing them. I'm accepting them. I'm letting them say all the things they've been trying to tell me for years--all the hurt, anger, frustration, desperation, and confusion. And, the hardest part, I'm relaying the messages to the other people who need to hear it.

That last paragraph makes me sound nuttier than a fruit cake, but I don't know how else to describe it. For the first time in a long time I know I'm not crazy. I saw my psychiatrist, just to be sure. And she agreed. She said, "You're not depressed. You're not overly anxious. You just have some huge things facing you. But you are handling them as well as any person could." I don't feel cosmically out of control or overwhelmed. I'm surprised by the intensity of the emotional torrents playing out but they feel honest and, surprisingly, empowering. Not in the moment of it all. But later.

This whole process reminds me of that aphorism, "Depression is just anger turned inward." That reductionist aphorism gets a lot play and I wasn't entirely sure how I felt about it until recently. I think I was afraid of certain situations in my life and of their consequences--emotional and spiritual and physical--and so I had to protect myself and my family. The only way I could protect us all was to hide the reactions and feelings and the only place to hide them was inside myself. I would never say depression is just any one thing, but we do put ourselves at risk when we inappropriately limit how we are allowed to express ourselves.

But you know, I was scared and alone and I think I did what I had to do at the time. And I'm doing what I have to do now.

What comes later, after the emotional swells and storms, is a cleaner feeling. A lighter feeling. The only way I can pin it down is to say it feels like honesty. I never thought such a simple idea would be so powerful in my life but I've come to realize that honesty is a big deal because it--our willingness to be honest with ourselves and the people around us, our integrity--is a large part of what keeps our agency in tact. Now that I'm being honest with myself and the people closest to me (which at this point is, like, two people) about what is really going on, I have so much more freedom. My choices are no longer limited to repression or desperation. Things like hope, forgiveness, change, and soul-restoring rest are finally, truly on the table.

When I was kid we had those Standing Tall tapes and there was this story that is pretty cliche but has stuck with me. I'm sure you've all heard it before, but I'm reiterating it because it has taken on new meaning for me.

This girl fell and got a splinter but instead of pulling the splinter out, she just put a band-aid on it and tried to tell herself she was better. But the splinter was still in there and her body was trying to push it out so the wound kept swelling up and filling with pus and aching. No matter how many times she replaced the band-aid the wound couldn't heal because of the splinter. She had to pull the splinter out--even if it was going to hurt a lot--because it was going to save her pain in the long run. It was the only way her wound would ever go away.

(This is similar to President Monson's talk about Hidden Wedges. Tangential, perhaps, but worth thinking about.)

I think this is how a lot of us function emotionally. We have emotional splinters that we keep trying to cover up, but the wounds will keep producing pus and swelling until we yank those nasty, infection-riddled suckers out. To be clear, medication and therapy are not the band-aids. The band-aids are our unhealthy coping mechanisms like anger, addictions, avoidance, overeating, overexercising, or dishonesty. Medication and therapy are the tweezers, the tools, that we use to extract the offending shard. They pave the way for healing.

There's still a long way for me to go and I'm still struggling with some very fundamental questions and I do still doubt my emotional stamina to see this process through, BUT there's a little hope out there now for me. I don't feel like I'll be stuck in the never ending spiral of depression. My wounds can maybe, hopefully, finally close. Counseling and medication may still be necessary for the long haul (my psychiatrist wants me back in a month), but they are no longer stop gaps for the suicidal eventualities.

And that feels good.
Posted by Laura at 9:52 PM

Whatever happens, we're here for you.

I'm glad you have the courage to do what you need to do, even when it's hard and scary.

I know how it feels to open up about things after having held them as deep and quiet and possible, regardless of how it felt you were being eaten by them.

It is so refreshing for me. And yes, now that you mention it, empowering.

Good job for you and I'm glad you are having a positive experience right now!

You demonstrate great courage, both in you private struggle and in your willingness to express some of it publicly. It's o.k. if you question your strength to see this new approach through as long as you remember that you don't have to do it alone. "Rely...wholly upon the merits of him who is mighty to save." (2 Nephi 31:19)

Story of our Life said...

I'm somewhat new to your blog. I am not exactly sure how I stumbled upon it a month or two ago.

BTDT doing it now. Still struggling. I've been hospitalized one 2 many times. Had similiar thoughts over the last several years.

It is empowering to hear someone else talk about the same things that oftenn go in and out of my thought process.

I'm happy for you and hope and pray that youare able to continue on this journey and find the peace that we all need so much!!

I haven't checked in on your blog for a while -- but what a great post this is. I was so struck by what you said about facing whatever it is that's confronting you, and how that opens up options OTHER than desperation and repression.

I've experienced similar insights when I've finally had the strength to face my struggles head-on -- and the most freeing thing I have ever done for myself was to give myself permission to feel what I was feeling and journey wherever I needed to.

God bless you, my friend. I'll be praying for you.

Your blog is inspirational... I too struggle and am grateful for your words of wisdom!
You have a way of expressing yourself that I find truly impressive!
Thanks for your courage to write for so many of us :)

Just stumbled across your blog. I wanted to share something that has changed and helped me so much. Have you ever heard of EFT, or Emotional Freedom Technique? It uses principles of acupuncture. It has helped me greatly reduce my depression. I would recommend it to anyone. Go to www.emofree.com and download to free manual to learn it yourself. You can also find a licensed practicioner in your area. It is remarkable.