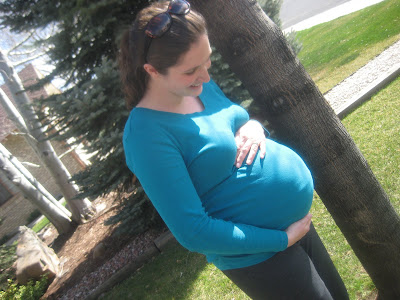 Sorry I've been negligent blogger. But, well, a lot has been going on.

The big news: 2 weeks ago we moved. Hooray! Even though our new house is only a few miles away from our old house, it was still a crazy amount of work. Even with the 15 people who helped out from our ward, it was still a huge job. Two weeks into the new place we are figuring out where to put things, but the kids seem to have acclimated now so that's good.

(Tangentially related anecdote: Yesterday my four-year-old and my two-year-old got into a fight about whether or not we could still rightfully call our new house "new". The two-year-old is stubborn and illogical and would probably call it our "new" house forever. The four-year-old is also stubborn but is beginning to grasp a few logical concepts. She figured that since we've been in the house for "like a hundred days" no one was allowed to call it the "new" house any more. Cause "one hundred days is a super long time." The argument was never settled but it seems to indicate that they are all figuring things out in their own way.)

I think I'm feeling more settled too. For the most part, my stress level has gone way down since moving day and the contractions have slowed. The doctor wanted me on bed rest until 37 weeks and I've done my best to only tackle small projects around the house.

Technically I can be done with the bed rest now, but I don't actually want this baby to come quite yet. Taking care of a newborn is waaaay harder than being pregnant and I would like to get a bit more unpacking taken care of before Number Four makes her debut. Besides, we don't even know what we want to name her yet. Doesn't that mean she should wait just a little longer? However, we did find the baby clothes and blankets the other day so that's good.

One more item to catch up on:

*The psychological tweezing. Ever since I posted about this back in January I've been meaning to follow up but at a loss as to how. The most I can say about it now is that it was a harrowing process and left me exhausted. Once we put our house back on the market and things started picking up with the sale of our home and finding a new house the psychological tweezing eased. I had more than enough other stuff to occupy my brain and emotions. (Just as a side note, everyone should have to go house hunting with a pregnant woman. You've never seen emotional ups and downs like the ones I pulled. It made me a very discriminating buyer. *Wink, wink*) Since things have started to settled some of the memories/flashbacks and emotions have started to crop up again, but I've mostly been ignoring it. I don't feel ready to go back to that yet. And, as several of you readers suggested, I would probably benefit from some therapeutic help with the next round. EFT, you know the crazy tapping and muttering that isn't actually crazy, would probably be beneficial and I think that might be a good route to take next. I just don't know when I'll be ready to pursue it.

One more thing to catch up on: Being pregnant with a history of depression.

I really thought that I would spend a lot of time during this pregnancy blogging about being pregnant and depressed. Perinatal depression is real and frustrating and it's a subject that could certainly use more writing and thinking done about it. I had planned on contributing my own two cents to the whole thing, but it just didn't work out that way.

The weird part is that I haven't been as depressed this time. It's been an emotional time for me (duh!) but the emotions haven't been paralyzing like they have in the past. They've been intense and painful but they haven't gotten stuck. I've met with my psychiatrist and my therapist periodically and they both agree that I'm NOT depressed. I'm just dealing with some very, very real emotional stuff.

This really is a blessing, this whole not depressed thing. I kind of don't know what to make of it. When I was pregnant with Baby Number Three, Mr. J, I had such a hard time with anger and with feelings of defeat. But not this time.

I think things might be different this time in part because of the psychological tweezing and in part because of the increased support from family and friends. I've finally let my family in on a little of what's been going on and they have been so supportive. I can feel the powers of their prayers and how hard they are pulling for me. The same goes for friends. I've always struggled to maintain friendships but at this point in my life I have a few people I honestly believe like me and will predictably be there for me--even when I have nothing to offer them--and they will be caring and discreet and respectful about it. That is such a gift. Of course, my therapist and my psychiatrist are part of that support system too. It's always nice to have an objective, experienced individual to offer perspective when you need it.

I think another part of it is that I've quit trying to forecast the future. I used to spend a lot of time worrying about what all of this would mean down the road and trying to control long term outcomes. My therapist likes to remind me that no matter how much I think/worry/obsess about the future I actually have little control over it. I don't think I've mastered that ultimate zen ability of "living in the moment" but I do think my present has finally begun to outweigh my past and my future in importance and that has brought a great amount of relief. It's so much simpler to focus on today and the upcoming week and month rather than years ahead or behind me. I hope it's a way of thinking that I can hold on to.

Thanks for sticking this out with me and for being a part of my journey. I appreciate your comments and insights. This blog is definitely part of the support system that's been buoying me up.

Have a happy week!

What a cute pregnant woman you are! Seriously, love the picture. :) I'm so glad that you're settling into your "new" house, and that everything is going well with the pregnancy and life in general. We'll be excitedly awaiting the arrival of your newest family member, though I hope she will give you a little longer since that's what you're hoping for. :)

LOVE the pic (You are so gorgeous!!) and LOVE the post. It's great to hear you sound so hopeful and peaceful. You've been through a lot these past few months and have handled it with grace and patience. Yay for 37 weeks!!!

I'm delighted to have found your blog. We have at least four things in common--LDS, mom, depression, writing.

I hope to have time to read more soon.

I wish you a happy delivery and as smooth a transition as possible with #4.

Love your photo! You're gorgeous! :) I love so many of the things you said, too. We still want your older three to come for a visit when the little one arrives. If you don't call me, I'll call you. Love ya!

Hello. I was searching for a way to help my wife who has depression and I ran across your blog. My wife has been taking Prozac for a while, but stopped taking it, and really needs some help. I was wondering if you could take a minute to recommend your PFF (or another doctor) that I could get an appointment for my wife who I love and want to help so much. We live in Highland, UT, not sure if you are in Utah or nearby and can recommend any doctors?

Derek--
I'm glad you stopped by and left a comment. I don't live in Utah but a good place to start with finding a psychiatrist or therapist is with your family doctor or your wife can ask her OB for a referral. Prayer is always helpful too! Good luck and please keep me posted!