My maternal grandmother died a couple weeks ago. It has affected me more deeply than I had thought it would. The grieving process has been surprising to me. I've experienced the death of a loved one before--most notably that of my little sister when I was seventeen and the death of my just a couple years ago --but I am only now realizing that each grieving period is as unique as the individual who died. Each death requires its own response and there is no road map.

Nana had been ill for a long time and we'd known since late July that her death was imminent. And just a few weeks ago I made a trip out to Seattle to visit her one last time before she passed on. It was a short trip,less than two days, but it was amazing and harrowing to be with someone who was so near the veil.

Still, her death surprised me and it took four or five days before I emotionally registered it. I am surprised to discover I actually miss her; as a family we weren't all always on good terms with each other and there were many years that went by without us speaking. Suffice it to say there's been a lot of emotional shrapnel from many sources since Nana's death and I've been seeking ways to accept the feelings, experience them, and move forward through them. This has taken on a number of forms (crying, being stressed out, being forgetful and generally muddled, an inability to complete housework, a desire for sloppiness) but what I want to blog about today is the search for a memorial, the search for a way of making tangible a process that is inherently intangible. When Nana died, I lost something--not only her person, but something impalpable that needed to be recognized and named.

I have a friend who owns an expressive arts studio so I decided to spend an evening there searching my mind and heart to find whatever it was I was looking.

My first effort was a song. I made a video of myself singing "Amazing Grace". I was going to upload if for you listening pleasure (or un-pleasure as the case may be)but it wouldn't upload. You all didn't miss much on this one. I find my voice on this song fairly anemic. Listening to my performance of that song now, it smacks of self-indulgence.

My next effort was a picture. I am probably the least skilled drawer/painter I know. But since working in the expressive arts I find a lot of fulfillment in creating visual "art". 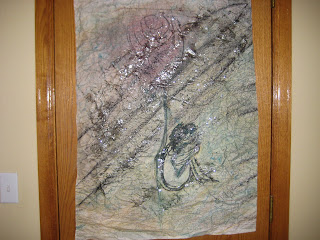 I had an idea in my head but was not able to translate it to the paper and so what I ended up with initially disappointing to me. I had meant to memorialize Nana and the picture seemed to fail at that. I put it up in my room (my thanks to the DH for his patience with that!) and studied it here and there. Finally I realized why the picture didn't work for me. I had memorialized *myself.* I was the woman in the picture sitting underneath the obscured rose (Nana's favorite flower). Nana may have inspired the flower, but that picture was all about me--which is why it fell flat. Well, that and the fact that I don't draw well. . .

Anyway, I did some writing that night but it isn't finished yet--which is why I'm not posting it here. I read some of it at the funeral and that felt good. It seemed to resonate with other mourners.

My final effort, and the memorial that worked best was this: 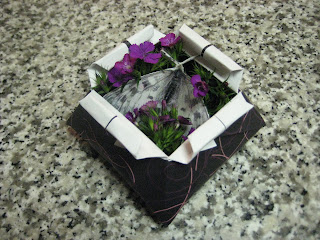 It's an origami star box with curled edges filled with small purple flowers and a butterfly. Butterflies are sort of my personal totem, and a conversation I had with Nana about butterflies inspired this piece. It felt good to create a home and resting place for that formative conversation with Nana and even though it was hard to leave it behind it was okay because I knew could make another one if I needed to. (If that makes sense??)I think it was my way of putting Nana to rest but acknowledging the fact that even though she was gone she was still going to have an effect on me. It was my way of letting her go but keeping our relationship intact.

The truth for me is that Nana was always a fairly inaccessible--intangible, perhaps?--person for me. I loved her and I'm almost certain she loved me, but, it wasn't the kind of relationship you could use to validate yourself or lean on. It was different. . . what's left though, after all is said and done, is that I loved Nana. And love, the very essence of the intangibility, is probably what I was really looking for all along.
Posted by Laura at 12:58 PM

I enjoy your entries. Thanks for sharing your feelings.